Artists who participate in Hyperdrawing: 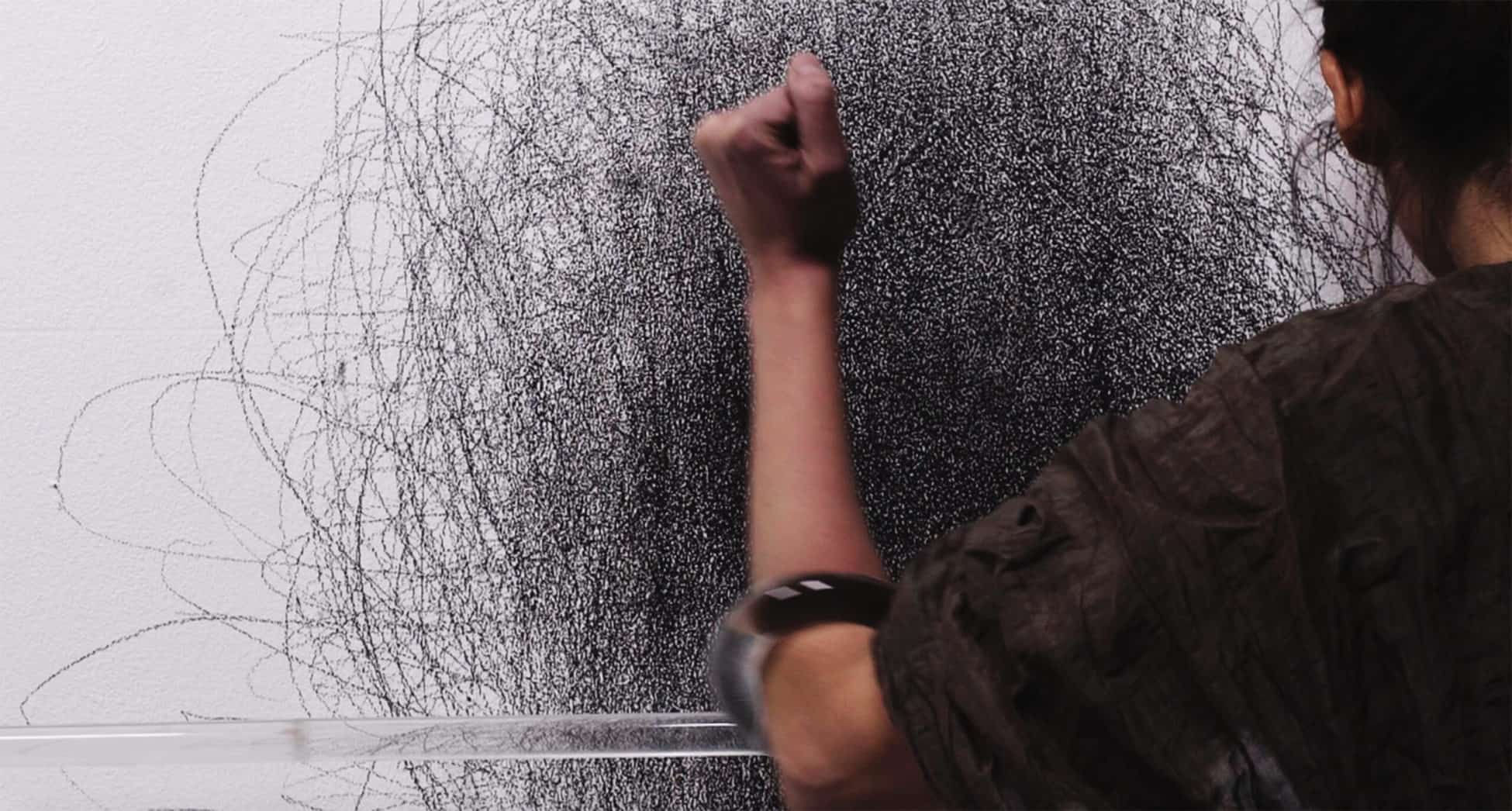 Drawing is often described as an intimate space of expression at the reduced scale of the sheet. Hyperdrawing reverses this notion and places the drawing within the real space of the exhibition, animated by the artist's body. The artists of the exhibitions reconnect with instruction-based drawing and performance art – as they emerged in the second half of the twentieth century – while simultaneously bringing a contemporary perspective to them, infused with a new contemporary angle.

Therefore, the works exhibited are the outcome of a performative gesture carried out during the exhibition, or in the space before the opening, following pre-determined instructions, or through an interaction with the viewer. Thus, the gestures that contribute to the making of the drawing - traditionally in the privacy of the studio - are placed at the heart of the exhibition.

The central axis of this project is the attention to the relational dynamics between beings and their living places expressed by a drawing in situ. The exhibition space thus becomes the surface of inscription where the drawing is made live. For some of the proposals, the drawing is permeable to the place itself, as well as to the interaction with the visitor or with the other artists.

Finally, Hyperdrawing echoes the notion of "hyperobject" of the philosopher of ecology Timothy Morton, who speaks of the world as a set of phenomena manifesting a part of a vast whole, in constant movement and without specific place, giving themselves to see as well as partially, by gestures, by traces.
What if drawing was the ideal language to manifest this relational ecology of the world?

and curator of the exhibition Hyperdrawing

Hyperdrawing celebrates the fifteen-year anniversary of the show's existence by incorporating three historical works from the collection of frac Picardie (official partner of Drawing Now Art Fair). Indeed, the artists Sol LeWitt (USA), François Morellet (FR) and Eric Snell (UK) represent the historical turn of drawing towards instruction pieces, as well as its performative character. Their work has contributed to understand drawing as an action, realised by the draughtsperson. This extends to materials, which also perform. This is the case in Eric Snell's work, where the tension of a wire, held by magnets, recalls the performer’s muscles in action.

This muscular tension also evokes sport, a central reference for Emmanuel Béranger (FR), who has transposed his sports practice into art, while freeing it from the competitive element of measurement. Similarly, the work presented by Boryana Petkova (BULG) is an endurance event. It is realized with another artist of the exhibition: a glass device connects their hands, thus having to coordinate in order to draw until exhaustion. Katrin Ströbel (DE), for her part, creates an all-over drawing of female bodies in suspense or fall, making ornament a political statement about the ambivalence of both images and gendered bodies. The relationship between humans through drawing is led by Thorsten Streichardt (DE), combining graphic and sound expression in interaction with the audience. Juliette Green (FR), meanwhile, interviews visitors to the exhibition to create a diagram with the result of her research around the show. Finally, plant and mineral phenomena are, on the other hand, represented by Stéphanie Mansy, whose design is a kind of erosion applied to a wall surface through several heterogeneous techniques such as engraving and felt, inspired by natural ecosystems.

Do the practices of drawing and sport have a common language? Emmanuel Béranger's work proposes the line – trace of movement, delimitation of playing areas, and elementary figure of drawing – as a possible element of this shared lexicon.
Following a series of jumping protocols, in particular, the artist marks the trajectory of his body on the wall and floor. Other actions are recorded by a line drawn or materialized by different objects. The drawing thus makes visible an effort, a tension, in short, a surpassing of oneself typical of athletics but also of performance and artistic practice.

Through this purification of athletic know-how, Béranger joined an abstract pictorial tradition, while reformulating it. It is close to the abstract language of the twentieth century, while rooting it in a philosophy of the recorded trace of movement. His expressive drawings, subtle installations and performative gestures emanate from a sensibility acquired elsewhere, opening up a dialogue between disciplines: sport, art, dance, measurement technology, performance and graphic expression, some focused on measurement and competition, and others on poetry, abstraction and the free expression of the body.

What relationship can drawing have with nature? Does it represent it or is it nature itself? Stéphanie Mansy's work is crossed by this question. It emanates from a sensitivity developed in different natural ecosystems, becoming one with them. Indeed, the artist moves into environments where life swarms, not to draw, but to absorb the gestures of growth, proliferation and becoming nature in order to incorporate them into his drawing practice. It "collects and crystallizes in the form of drawings, accidents, injuries, protrusions, imprints of time, flows and rhytidomes left on trees". If her work is at the limit of abstraction, it is because the artist does not represent nature, she makes him almost a collaborator. The hand, the heterogeneous drawing techniques and the vegetal and mineral swarming work together.

Stéphanie Mansy sometimes works in situ, in the exhibition space, preferring walls that have lived. This is the case of her intervention at the Maison de la Culture in Amiens where she creates a microcosm that could just as well represent natural events on a large scale. Moving from a global view to the smallest, his work is a proliferation of minimal organic forms or an overview well beyond our scale, through techniques specific to the tradition of drawing such as printmaking, lead mining and engraving.

Frac Picardie (25 March – 21 May) HYPERDRAWING: a dialogue between Boryana Petkova and Katrin Ströbel

Hyperdrawing talks about the expansion of drawing outside the sheet in the exhibition space through the artist's body.
Wall drawing, performance, and installation thus make up the exhibition, which is built as a dialogue between two artists, Boryana Petkova (BULG) and Katrin Ströbel (DE).

Drawing here is tracing an exploration of oneself through others and the world. Both living between several cultures – French and Bulgarian/German, in particular – Petkova and Ströbel are sensitive to how the foreign body takes place in a territory, a space, a culture. Thus, above each of the two doors that nevertheless lead into the same space, their names were written by the artists with drawing tools, thus demonstrating that the notion of belonging can be common and shared. For them, drawing is indeed a tool to communicate and share singular experiences, relying on the exhibition space and a broad conception of the discipline of drawing, including tattooing, wallpaper, performance and ephemeral wall drawing, among others.

A dialogue implies a face-to-face positioning, with opposing perspectives nevertheless joining in the center, a focal point however ephemeral. The center is everywhere and therefore nowhere. It is, in the end, where it is placed. This exhibition is the testimony of a dynamic and fluid dialogue with places and other humans, which reflects our condition, always in the making.

In order to dialogue, it is necessary to understand a perspective that is not ours, but also to position oneself.
This search for an identity is therefore built not only in us but with the bodies that form and influence us (urban body, human body, politico-social body), their places of life, as well as the parallax effort (getting out of one's own perspective) necessary to be in relationship with the world.

The conversation between Petkova and Ströbel is reflected in the way the works communicate with each other, in a free language, from the simple plot to the drawn portrait. This space-drawn conversation shows the dynamics of a possible relationship with others and the world, rather than portraying them as unfathomable, mysterious, or even threatening. Rather than keeping at a distance, the artists propose a committed positioning of critical immersion.

This is the feminist positioning of the artists and the curator of the exhibition, which is understood as a dialogical openness, an embodied psycho-social construction, made of differences that speak to and confront each other, of inclusion rather than exclusion. 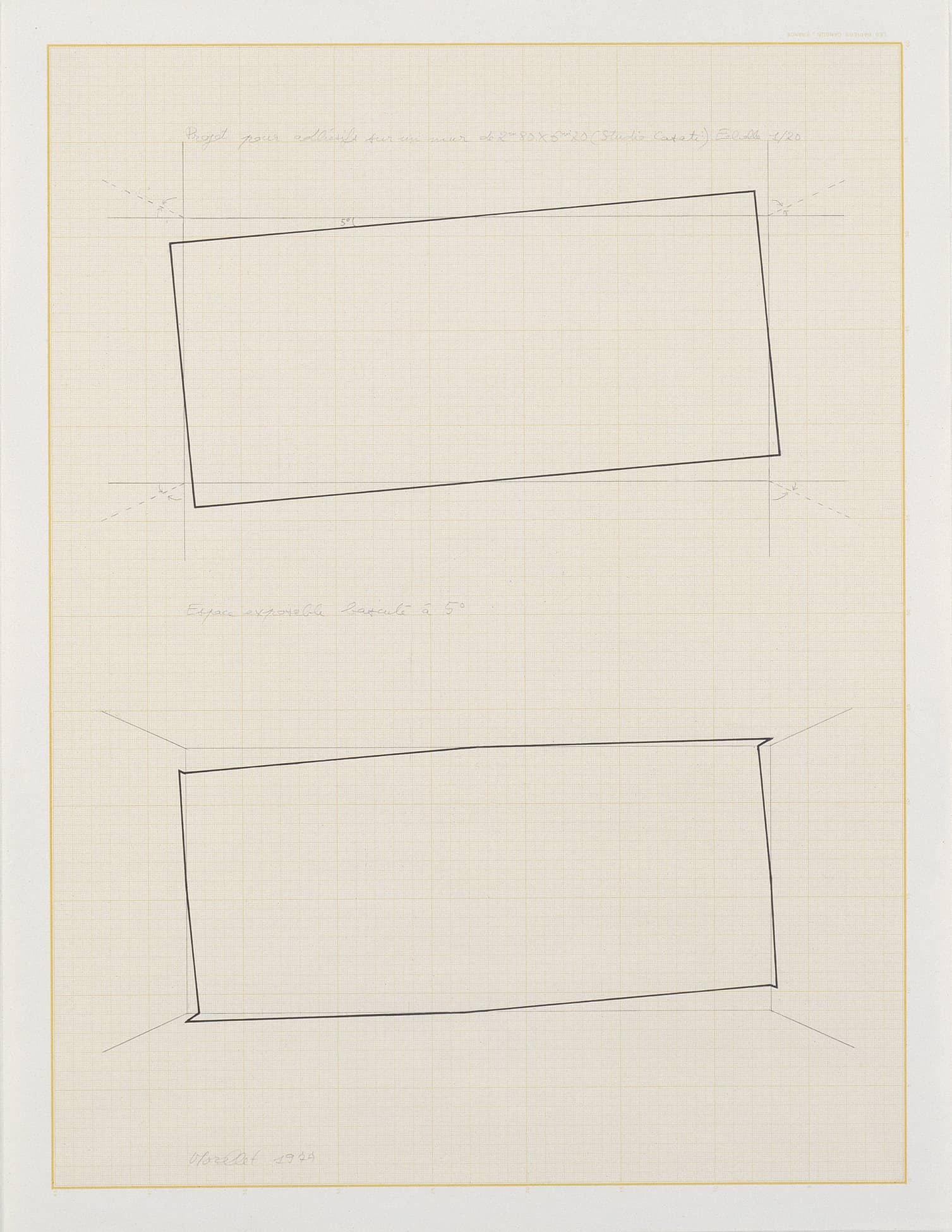 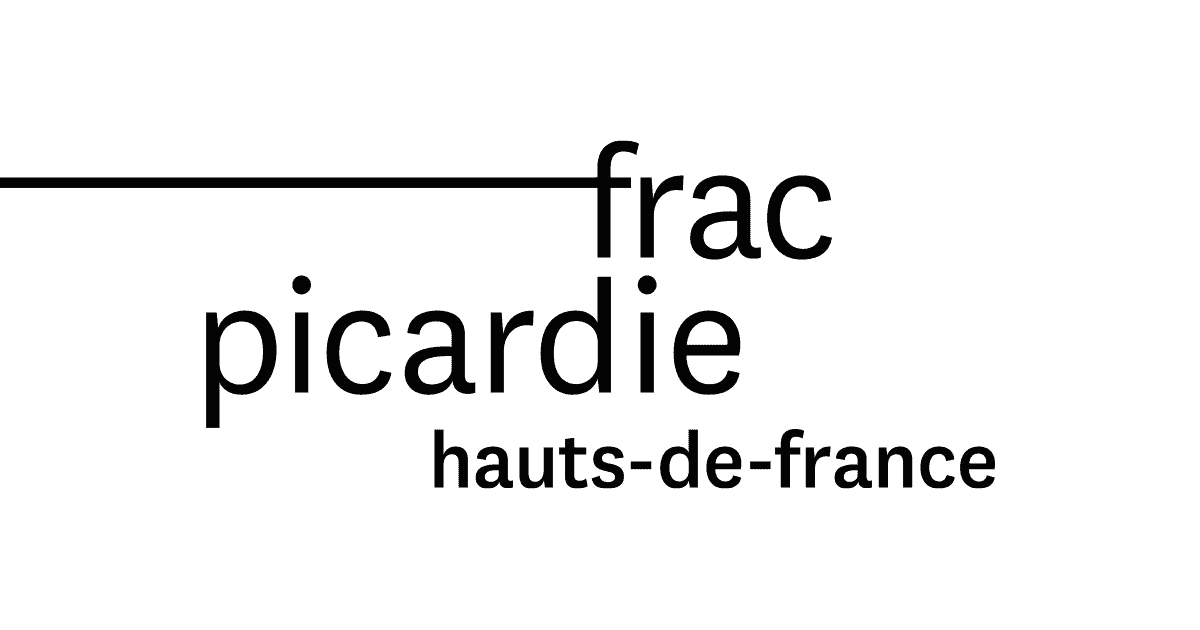 On the occasion of the 15th anniversary of Drawing Now Art Fair - from 19 to 22 May at Drawing Now Art Fair - three walls are made available to artists selected by our three historical partners: the Embassy of the Netherlands in France, the École des Beaux-Arts de Paris and the Pernod Ricard Corporate Foundation.

On this occasion, each of the partner structures invited one or more artists to produce a mural on the walls of the Carreau du Temple.

Discover the mural by the artist Marisa Rappard, invited by the Embassy of the Netherlands in France, that of Boris Kurdi, winner of the 22nd Prize of the Pernod Ricard Corporate Foundation and Léonie Porcher, laureate of the School of Fine Arts.

Embassy of the Kingdom of the Netherlands 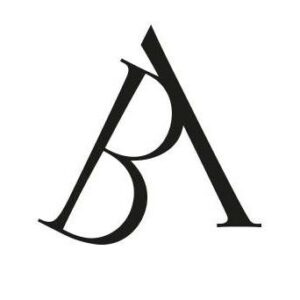